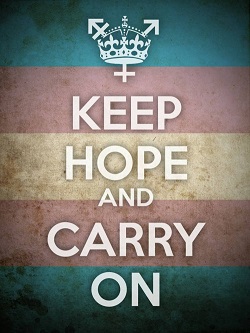 It can be extremely difficult to be proud of being a transgender person. People have been telling me for a long time that transgender people are freaks, that we are delusional and that we shouldn’t be accepted because it might encourage others to do the same.

I’ve had people throw things at me, like someone threw a newspaper that was on fire, another person through a leg of a chair, kids have thrown stones. I was at a chipper when someone warned my boyfriend who was talking to someone else from the trans community that he wasn’t actually talking to a woman. There is nothing quite like being outed in public. Friends have been assaulted, chased, refused entry to bars et al. I’m actually doing pretty well relatively speaking, I have a good job for one thing.

Passing becomes the ultimate goal, to be fear from the anxiety of someone being able to tell that you are in fact transgender. You start policing the tone of your voice, your appearance, your attitudes, how much you smile, your gait, the topics of conversation you’ll engage with, how you laugh and so on. Passing reflects the oppression that is happening all the time for trans people and no matter how well you pass, someone might still find out the truth about you, the horrible truth, that you aren’t just another person, you’re different and you’re weird.

It’s not just me either, particularly when it comes to family, transgender people will tolerate a huge amount of rejection before they admit that their family are actually at fault, before they will say that they worth more than the treatment they get. I know that many people find it hard to recognise their own value but what I’ve seen is trans people telling other trans people to be more understanding of family members who have treated them horribly.

And the level of policing of gender that goes on within trans circles and towards trans people can be more than I ever see in cis spaces. We didn’t give up most of our social status to get out of one box only to trap ourselves in another, did we? Surely the process of transition should be about self discovery, not taking the pre planned route.

Don’t get me wrong, I’ve seen amazing acceptance and wonderful support from the trans community too. I just wanted to illustrate how much it gets into your head, how you actually become transphobic yourself because you are surrounded by it – people teach you to hate yourself.

People usually pick up on me being trans by my voice, if not by my appearance, and so I’m usually rather shocked when someone doesn’t pick up on it, maybe delighted is a better word. It’s become a mixed feeling though recently when it happens. I feel happy and then suddenly, I feel sad that I was so happy about my invisibility. The best feeling I had recently was when someone said after I talked about being raised as a male, “but your so pretty”. I don’t think I’ve gotten a better compliment in quite a while, but it nags at me. I want to be proud of who I am.

I recently wore a t-shirt that talked about trans to a roller disco I go to regularly. When I first went to that roller disco I was afraid to talk to anyone because they might read me as trans. I barely said a word, and when I did people wouldn’t be able to hear me making the whole experience excruciating. People would come up to me and ask me if I’d thought about joining roller derby or invite me to come talk to the roller derby girls and I would just be really quiet, try to say as little as possible. When I’d go to the bathroom, I’d rush in so that no one would try to say anything to me, or notice I was there, and rush back out, washing my hands as quickly as humanly possible. Kids were a big worry because they will actually outright ask you if you are a boy or a girl and I don’t know how ignorant people are about transgender people, they might think I’m a paedophile.

But recently I wore a t-shirt that said Trans Education Advocacy. I’m so fucking brave, you have no idea. Two of the people that work there know me by name and I’ll sometimes just go up and talk to them like it ain’t no thing. I’m still terrified, but it’s getting better, cause I want to be proud.